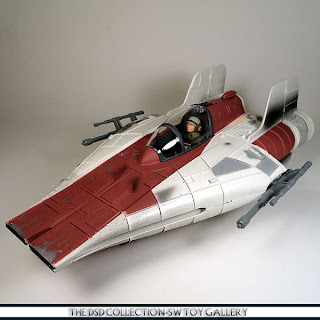 Introduction: The A-Wing was always a fan favorite since the original vintage version was released during the Droid era and when most collectors grew out of Star Wars to start playing video games. Therefor, many of us missed out on this awesome ship. A decade later, the POTF2 line was born and eventually produced an A-Wing early in the line so many collectors wer...e finally able to own one.

My Opinion: Since I didn't have an A-Wing as a kid, I was stoked to get the POTF2 version. However, I didn't start collecting again until 1999. You can bet that this ship was one of my top choices. It only took me a year to get caught up on every Star Wars figure and toy made from 1995 to 1999. I accomplished most of that through trading with other collectors. To bad the new incarnation didn't come with the original electronics though because it does have the battery cover on the bottom still.

Click here to view the full gallery.
http://www.deathstarplans2.net/ToyGallery/categories.php?cat_id=2614
Posted by DeathStarDroid at 10:24 AM