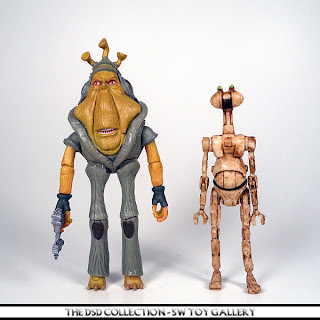 A double double update! Here is the second of the Pod Racer two packs that are making their first debute as action figures including their useful Pit Droids. Although this is probably the most hidious looking figure so far, we still needed it made to complete the entire Pod Race entries.

Ben Quadinaros was a male Toong from the planet of Tund, and operated as a Podracer pilot during the last decades of the Galactic Republic. Quadinaros was known as something of a coward, though this was not entirely accurate. However, like most Toongs, he buckled under when confronted with social interaction. His timidity around others quickly earned him an undeserved reputation as a coward, and while he might not have been spineless, he didn't have the skill required to achieve success in the Boonta Eve Classic. Quadinaros had only raced previously on the Pouffra Circuit, widely regarded as one of the safest, and therefore in the collective opinion of the Podracing elite, wimpiest, courses in the galaxy.

Click the link to view the full gallery:
http://www.deathstarplans2.net/ToyGallery/categories.php?cat_id=2754

Posted by DeathStarDroid at 11:32 AM