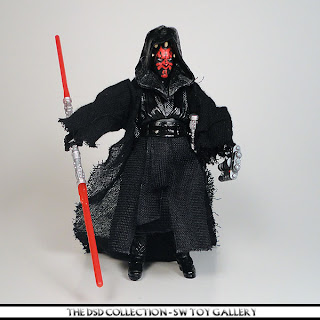 Today's Toy Gallery update features the latest Darth Maul figure from the Vintage Collection series. This is an all new figure for Maul and not a repack. There are some goods and some bads with this release. The good is that the detail on the face and head are outstanding along with the articulation. The accessories are also a nice addition for an ultimate Maul. However, the cloak and hood are sorry. The cloak is garbage because its frail and looks like it was found in the trash. I know Hasbro could of done better than that. Although the hood is kind of cool, it is still too big and still shows his horns. Other than that, this is definately the best Darth Maul to date. Don't pass this one up!

Back of card: "Celebrate the legendary Star Wars saga that changed the universe forever! This collection brings to life the incredible story of good versus evil that captured our imagination and took us to a galaxy far, far away. Iconic Star Wars heroes and villains are captured with incredible detail and premium features to commemorate each epic tale in the Star Wars saga. May the Force be with you!"

"Darth Maul appears in Star Wars Episode I: The Phantom Menace as the apprentice of Sith Lord Darth Sidious, who sends him to capture Queen Padmé Amidala and eliminate the two Jedi, Qui-Gon Jinn and Obi-Wan Kenobi. During the film's climactic scene, he stabs Qui-Gon in the stomach with his lightsaber, fatally injuring him during the duel. He then knocks Obi-Wan into a reactor chasm; at the last minute, however, Obi-Wan uses the Force to propel himself out of the chasm, equipping himself with his master's lightsaber. Obi-Wan quickly cuts Maul in half from the waist. Maul's body separates into two pieces and falls into the chasm. Maul's murder of Qui-Gon places the responsibility of Anakin Skywalker's training into Obi-Wan's hands, setting the stage for the rest of the prequel trilogy." -Taken from Wikipedia

To view the full gallery click here:
http://www.deathstarplans2.net/ToyGallery/categories.php?cat_id=2759
Posted by DeathStarDroid at 10:32 AM