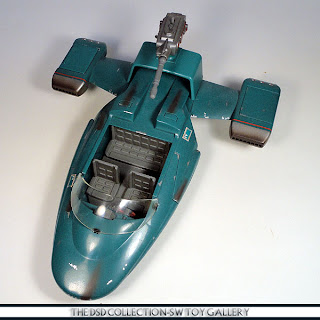 Introduction: It was 1999 when Star Wars: The Phantom Menace hit the big screens and Hasbro produce a wide variety of new action figures and toys. Among all of the initial toys that were released came this sleek looking Flash Speeder. Everyone loved the old landspeeder so why not make a modern or shall I say older model. Although this speeder has a nice look t...o it, the seating arrangement is not very good as you cannot fit a figure in the back seat. There is no leg room.

My Opinion: I really like this type of Speeder but I hate the idea of not being able to fit any figures in the back seat correctly without them looking lazy with their boots on the seat. Most of the Episode 1 figures had some sort of plastic skirt which made it difficult to even sit them in the front seats. I don't think that the creators were getting any rest when the started making these toys back then. All in all, this speeder is a nice addition to anyone's collection. Probably even better if you can customize one yourself to fit the legs of the figures in the back seat. I thought about making it Flintstone style. lol

Description on the back of box:
"Among the large landspeeders used by Naboo's Royal Security Forces, the Flash Speeder became an important component in the fight against invading Trade Federation forces. This heavily armed surface transport helped Captain Panaka and his volunteer resistance defend their beloved capital city of Theed."

Click here to view the full gallery.
http://www.deathstarplans2.net/ToyGallery/categories.php?cat_id=2612
Posted by DeathStarDroid at 2:11 AM