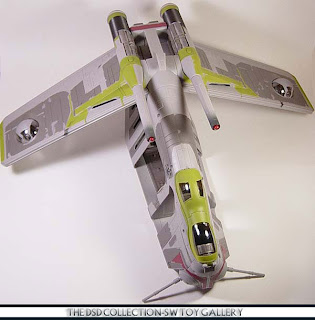 Introduction: Today's VOTD features the third release of the Gunship. This version sports a light green color scheme along with some battle damage. The original gunship was release back in 2002 which had a reddish color scheme during the Saga packaging run. Once put together the wing span is huge. This vehicle takes up some serious space on any collector's shelf....

My Opinion: I really enjoyed having this vehicle in my collection. These ships are massive and look awesome with figures in them. The only one I am still missing from my collection is the Clone Wars black version. I hear it commands a pretty penny these days. I will just wait til the hype calms down and pick one up close to retail if not just a little bit above retail but I will not dish out to much money. These gunships look awesome hanging from the ceiling too. I totally recommend to every collector to at least have one gunship out of the box on display. You wont regret it, this thing is the mother of all vehicles, well next to the BMF its second place in my book as far as air assault ships.

Description on the back of box:
"The Republic Gunship is a powerful combat vessel used by the clone troopers. Its transport bay can carry large numbers of troops into battle, deploying them through the side doors and with the drop-off landing base. Outfitted with an impressive arsenal of weapons including "laser" cannons, chin guns and missiles, the gunship is one of the Republic's main fighting vehicles in the Clone Wars. "

Click here to view the full gallery.
http://www.deathstarplans2.net/ToyGallery/
Posted by DeathStarDroid at 10:11 AM