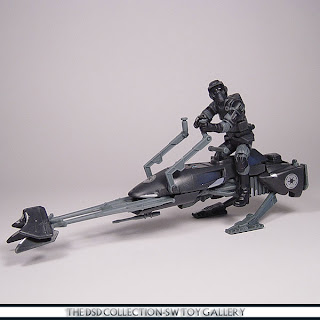 Introduction: If you went to Comic Con in San Diego in the summer of 2007 you may remember picking up this exclusive Shadow Scout with Speeder Bike for around $25. They were also available online as well which is where I got mine since I was unable to attend SDCC that year. This speeder is all black with the Scout being a retool of 2006's VTSC Bi...ker Scout with a wider stance allowing him to sit the speeder bike.

My Opinion: I think this is the best Speeder Bike idea ever. I was very happy to add one to my collection without having to attend the 2007 Comic Con in San Diego. The Shadow scout uses the best sculpt plus a wider leg stance to fit on the bike. This is one of my favorite characters of the SW universe. I totally recommend that if you do not have this bad boy in your collection to hunt one down and add it even if you have to pay a little extra. It is an exclusive so don't expect to wait for the price to come down. lol
Description on the back of box:
"Shadow scout troopers (a.k.a. storm commandos) are trained for missions of deep infiltration. They uncover plots hatched by shadows in dark corners, and they dig up deadly secrets that can be used to make enemies cooperate. Their speeder bikes are designed for silence and speed, with a tri-deflective energy shield that prevents detection."

Click here to view the full gallery.
http://www.deathstarplans2.net/ToyGallery/categories.php?cat_id=1773
Posted by DeathStarDroid at 9:31 AM