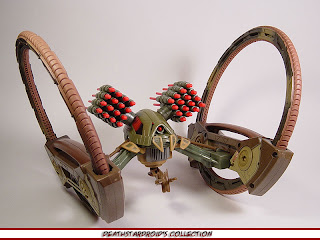 Introduction: Today is the second day of my 30 day Vehicle of the Day series which features the really cool Clone Wars Hailfire Droid. Back in 2003 marked the beginning of a new line called Clone Wars. At first we got movie like figures from this expanded universe creation which later turned into animated toys. The Hailfire droid is awesome due to the fac...t that it has really large wheels and shoots 32 missles at the slightest touch. Just because not to shoot your eye out, kid. Dodge that fire power. lol Also included were booklets of short stories that were packaged inside select Clone Wars toys from Hasbro.

My Opinion: I never bought this vehicle at retail back in the day. I ended up getting it for free from a fellow collector friend that lives in Australia named Hemish. It was very generous that he just let me gave it from his collection. In fact, I couldn't pass up that deal. lol Thanks again, buddy. I really like this droid a lot. I rarely play with any of my collection but this one I had a blast with shooting at the cats. Hasbro later re-released this vehicle slash droid in different packaging and in different colors. They even went as far as doing a remote control version but personally, I think that one is very ugly. I have yet to open that one yup yet but it looks like a lot of fun. Now where did my cat go? haha

Description on the back of box:
"A self-aware mobile missile-platform used exclusively by the Intergalactic banking Clan, hailfire droids deliver surface-to-surface and surface-to-air strikes with their stacked banks of rocket warheads. Hailfires roll along on oversized hoop-like wheels. In between the bracketing axle arms is a small, central body equipped with a single photoreceptor. When the Intergalactic Banking Clan pledged its forces to the Confederacy of Independent Systems (a non-exclusive arrangement, of course), its hailfire droids were added to the immense Separatist battle droid army."