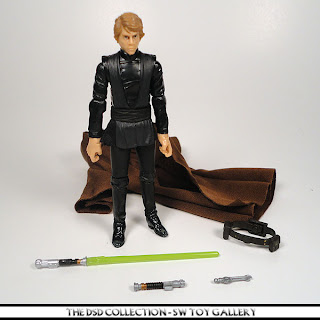 The design of the weapon was based off schematics Luke found in Obi-Wan Kenobi's hut on Tatooine. While the final product remained largely faithful to these designs, Luke simplified the weapon considerably, as this was his first attempt at constructing a lightsaber. For instance; he decided to use only one crystal for his lightsaber, as opposed to the ideal of three to allow for a fully adjustable blade.[1] Luke was able to gather most of the parts he required to build his weapon from various vendors in the city of Mos Eisley, including a high-energy reflector cup, power cells and a focusing lens. However, Luke was unable to obtain the one vital component that would bring the whole project together: the lightsaber crystal itself.[1]  -Wikipedia.com

Luke Skywalker (Lightsaber Construction) has been added to the DSP Toy Gallery. Click here to view the images.
Posted by DeathStarDroid at 3:46 PM