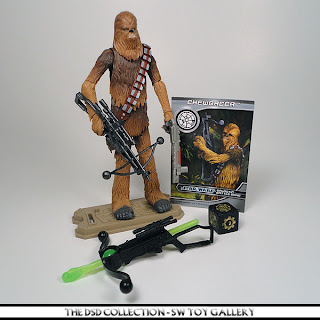 To portray Chewbacca for “The Clone Wars,” Mr. Mayhew was not required to don the outfit at all. (“I was doing it in my own clothing,” he said.) However, he did record dialogue for the character, having learned over the years to emulate the blend of bear growls and other animal noises used to create Chewie’s voice. Lucasfilm hasn’t said yet if Chewbacca will return for future episodes of “The Clone Wars,” but Mr. Mayhew said he was happy to have been so closely associated with the character for nearly 35 years. -Source

I personally missed out on finding the original release of this figure in the wild. However, I was thrilled to finally added the animated Chewbacca figure to my collection when Hasbro decided to re-released this figure in the new packagung. I hear that there was a variation though with the bottom portion of this hair skirt having slits to be able to bend his legs. The original not having them. So maybe I will hunt down the original still and add that figure as well to my ever growing action figure collection. Click here to view the gallery I put together for DSP. Be sure to stop by our Forum and join in on the discussion.

Posted by DeathStarDroid at 4:22 PM