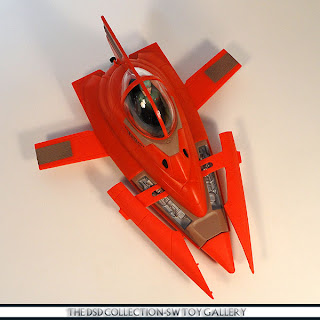 Introduction: Back in 1998, Hasbro Inc. still used the name Kenner on their Star Wars products and gave collectors their first Expanded Universe vehicles. Today's VOTD features the Cloud Car created from the art work of Ralph McQuarrie in toy form along with a Cloud Car Pilot which both look nothing like the ship and character used in the movie, ESB.... Hasbro released a total of 3 different vehicles under the EU realm, all which are pretty cool looking toys.

My Opinion: At first when these vehicles were released I had no interest in buying them because there were not seen in any of the SW movies. I didn't get any of them for a few years, not my passion for SW toys is to get everything Hasbro makes minus rehashes of course. Now that I look at this Cloud Car, I think the design in toy form is excellent. However, the orange color is overkill. If they re-did this ship in more realistic colors it might make for a great re-release. How many of you collected the EU vehicles? How many of you still have them in your collection?

Description on the back of box:
"Cloud cars are atmospheric vessels that employ both repulsorlifts and ion engines, filling the important gap between airspeeders and starfighters. Functional in many ways, twin-cockpit, patrol cars escorted the Millennium Falcon and her crew onto Cloud City during The Empire Strikes Back. It was here that Darth Vader had Han Solo frozen in carbonite while Princess Leia, Chewbacca, and C-3PO were held prisoners of the Empire. This single cockpit cloud car was designed and built based on production sketches found in The Art of Star Wars; its brainchild was renown Star Wars artist, Ralph McQuarrie."

Posted by DeathStarDroid at 2:01 AM