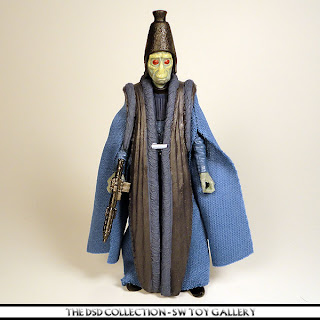 Daultay Dofine has been added to the Toy Gallery. Check out all the images I added. This figure is an all new figure which we have been waiting for to add to our collections. Hasbro did a great job with the articulation and soft goods. The sleeves are a nice touch. They should of used the same material and design for the Darth Maul figure released in this wave. Out of the package the sleeves are tucked behind the plastic scarf. The side shot I took are straight out of the package while the front and back shots are after I pull the material out. This is a must have for every collector. Hunt one down today!

"Daultay Dofine was the Neimoidian captain of the Trade Federation Lucrehulk-class battleship Saak'ak during the blockade and invasion of Naboo. Born to an influential family, Dofine quickly rose through the ranks of the Federation, utilizing a combination of backstabbing and family ties. He quickly made a reputation for himself in the Outer Rim Territories as a harasser of traders and a hunter of pirates. By 33 BBY, he was the commander of the Federation cruiser Revenue.
While at Dorvalla, the Revenue was lost in an altercation with the Nebula Front terrorist group, and Dofine then found himself in command of the Acquisitor. He also made his way into Viceroy Nute Gunray's inner circle, and he was made privy to Gunray's communications with the Sith Lord, Darth Sidious. Dofine later came to captain the Saak'ak, and then the Droid Control Ship Vuutun Palaa during the Federation's occupation of Naboo. He perished when the Droid Control Ship was destroyed in a battle with the Naboo Royal Space Fighter Corps". -Taken from Wikipedia.com

Click here to see the full gallery:
http://www.deathstarplans2.net/ToyGallery/categories.php?cat_id=2755
Posted by DeathStarDroid at 12:37 PM