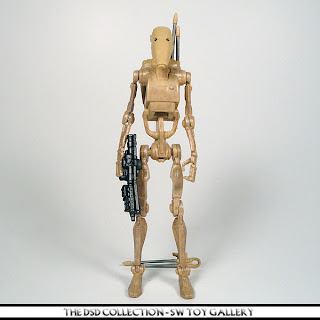 The newest Battle Droid released on the Vintage Collection card has been added to the Toy Gallery. This is by far the best incarnation of the Battle Droid. Hasbro has tried over the years to make a better Battle Droid than the Episode I version. In my honest opinion, none of them were better than the first release in 1999. Although they looked better, none of them could stand on their own. This new one can actually stand up without the use of a stand. So I would have to say Hasbro finally nailed this one. You also get a choice wether you want your Battle Droid to sport a backpack or just the antena.

A battle droid (also referred to as war droid or killer droid) was any droid designed for combat.
There were numerous types of battle droids. They predated the Galactic Republic by thousands of years, with the earliest known being Rakatan ancient droids and the war-robots used by Xim the Despot. Many of the best known battle droids were those used by the Confederacy of Independent Systems during the Clone Wars. At the end of the Clone Wars, Sith Lord Darth Vader turned off the Master control signal, deactivating the entire Separatist Droid Army. After this, battle droids were extremely rare. -Taken from Wikipedia

Click here to view the full gallery:
http://www.deathstarplans2.net/ToyGallery/categories.php?cat_id=2751
Posted by DeathStarDroid at 2:42 PM