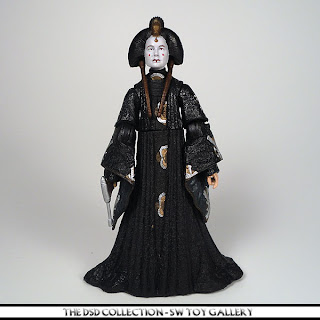 The Vintage Collection Queen Amidala in black travel dress has been added to the Toy Gallery. We all agree that we want Hasbro to make every single outfit in figure form of Amidala but they should at least go the soft goods route. This figure is more like an articulated statue. Even though the elbows bend, the arms look horrible when lifted up. Check out the images that I added of her arms up, she looks like an angel that you stick on top of your Christmas tree. She needed soft good sleeves. Other than that, this is a pretty cool figure that we definately want to add to our Padme collection.

Foreign Residence Dress. This dark, somber dress was adopted by Amidala during her stay in Senator Palpatine's quarters on Coruscant, following the Invasion of Naboo. The black dress was befitting of the gravity of her situation, and served to subtly acknowledge Amidala's separation from her people.[2] The fluffy, black, Cyrene silk dress was accented with beaded emblems over 240 years old that once adorned a former Queen's dress.[3] The dress's sleeves triangular in shape, and within them was a smaller sleeve. The sleeves were lined with a dark, lustrous, Prussian blue material. Her hair was arranged in a fan shape with a prominent foreknot and small suspensas. The foreknot was done in an intricate fashion, with her hair rippling like small beads. It was capped with a golden hairtip ornament, with a single, disc-shaped bead dangling from it, which rested against her forehead.[2] This hairstyle and costume, except in white, returned near the ignition of the Clone Wars when Padmé's decoy, Cordé, wore a similar robe when she died from Zam Wesell's assassination attempt on Senator Amidala's life.[6]  -Taken from Wikipedia.com

Click here to view the full gallery:
http://www.deathstarplans2.net/ToyGallery/categories.php?cat_id=2757
Posted by DeathStarDroid at 3:33 PM