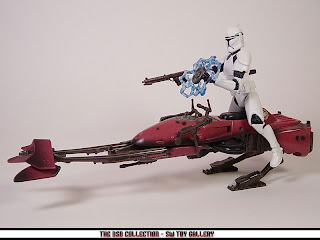 Introduction: Back in 2002, Hasbro re-released the speeder bike again along with an awkward looking Clone Trooper with removable armor which was again re-released during the Clone Wars line but with a gray color instead of the standard brown color. This speeder was released in the deluxe line on a card back and blister style packaging.

My Opinion...: I liked the idea of the armor being removable but the figure sucks terribly. The best look of the figure is with the armor off and the helmet on as seen above in the images. And to think they gave us this figure again in the clone wars line also was a horrible idea. He cant even hang on to both handles of the speeder bike. He also falls off his seat easily. This is one of the toys that a collector can pass on and not be sad. Who actually picked these ugly clones up? lol

Description on the back of box:
"Formidable fighters engineered for battle, a number of the Clone Troopers are deployed on speeders, then race into battle against the enemy forces. Daringly flying alongside the AT-TEs, they lob electro grenades into the vehicles to disable them in crippling explosions."

Click here to view the full gallery.
http://www.deathstarplans2.net/ToyGallery/categories.php?cat_id=2618
Posted by DeathStarDroid at 5:20 PM