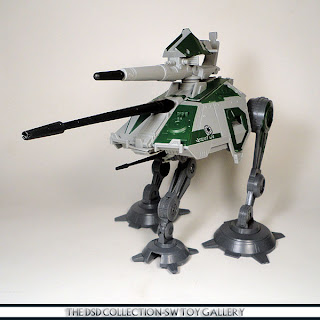 Introduction: The green AT-AP walker is repaint of the 2008's TAC AT-AP Walker and the third time it has been released. The second was just a repack of 2008's TAC AT-AP Walker. This repainted version is by far more superior looking that the original release. AT-AP stands for All Terrain Attack Pod but I am sure many collectors already kn...ow that.

My Opinion: I never picked up the original so this was a real treat to find repainted so I had to pick one up. Now I want the old one too for comparisons. The cartoonish clone troopers make a tight fit for the gunner cannon so I don't think a regular figure will fit to well up there. However, the back of the seat is made of a flexible plastic so it can me pushed back to fig a figure in snug. How many of you actually own both versions?

Description on the back of box:
"Designed as mobile battlefield armor, the All Terrain Attack Pod is an essential walker for the clone troopers. The center leg gives the AT-AP additional stability for crossing rough terrain, as the clone troopers who operate it blast the enemy with the vehicle’s projectile launcher and cannons. AT-AP walkers were used on Ryloth to liberate the Twi-Lek people from the separatists."

Click here to view the full gallery.
http://www.deathstarplans2.net/ToyGallery/categories.php?cat_id=2617
Posted by DeathStarDroid at 5:37 PM