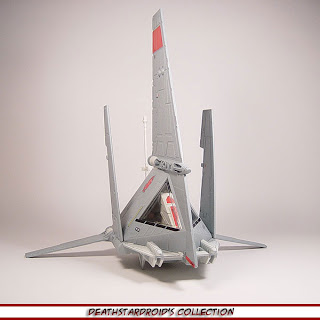 Introduction: Today I am starting a new feature or shall I say challenge. April Fools! I actually started this a year ago and stopped after 24 days. For the full month of April I am going to update you with a review feature called VOTD: "Vehicle of the Day". Everyday I will add a random Star Wars Vehicle review along with images and details. I thought about this on the first of the year but have not been able to commit to the idea. I will try to continue these series even after April. Share your thoughts and memories here.

My Opinion: Today's Vehicle of the Day will begin with the POTF2 Luke Skywalker T-16 Skyhopper. Originally, I never picked this vehicle up when it was first released because I thought it was the lamest idea for a vehicle. Many years later I decided to visit eBay and pick one up cheap still brand new in the box. After opening the box up and removing this boring looking vehicle I had changed my mind on it. I actually find this ship interesting now. The design is superb and very durable for play. I like the idea of how it turns into two vehicles. The inner ship kind of resembles the Imperial Shuttle in a way. Doesn't it? Again for some reason in the beginning of its release I refused to buy one. At one time I only wanted to pick up the ships that looked somewhat real to the movies. It wasn't til they made a toy version of this ship for the POTF2 Luke figure that I had any true interest in it. I wonder if Hasbro would revisit this ship again one day and add more details and features to it. Nah.. I personally wouldn't wanna see this ship get made twice. I am barely liking it now. lol I do recommend that if you never bouught one of these to go out and hunt one down. They are cheap now on eBay.  I rate this ship an 8 out of 10 for likeness.
Click here to view the full gallery,

"Luke Skywalker spent a lot of time flying his T-16 skyhopper, a pleasure and utility airspeeder, during his youth on Tatooine. The skyhopper's cockpit is modeled directly after that of the fearsome T-65 X-wing starfighters (they are both manufactured by Incom), which helped Luke during his abrupt transition towards becoming a Rebel pilot capable of handling the high-powered X-wings. Luke's T-16 was a high-end model fitted with a belly-mounted laser cannon and stereoscopic laser sighting device that allowed Skywalker to bullseye womp rats while speeding through Tatooine's Beggar's Canyon at a cool 900 km per hour."