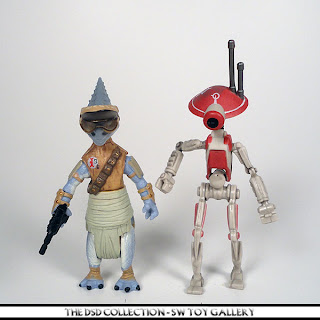 Now we are talking! Hasbro is finally putting out the long awaited Pod Racer characters from The Phantom Mence. Today's update includes the two pack of Ratts Tyerell and his trusty Pit Droid, Everybody like two figures for the price of one even if we get repainted droids.

Ratts Tyerell was an Aleena Podracer who participated in the Boonta Eve Classic on Tatooine in 32 BBY. Born on the planet Aleen, Tyerell had incredible reflexes, which made him an adept Podracer. For several years he built up his reputation and became well-liked by the other regular racers. He was furious at the way fellow racer Sebulba found his success through cheating and vowed to kill the Dug racer. However, Tyerell perished in the Boonta Eve Classic—his engines were too large for the tight confines of Laguna Cave and caused him to crash. His son went on to found the Ratts Tyerell Foundation, which attempted to outlaw the sport of Podracing. -Taken from Wikipedia.com

Posted by DeathStarDroid at 11:08 AM