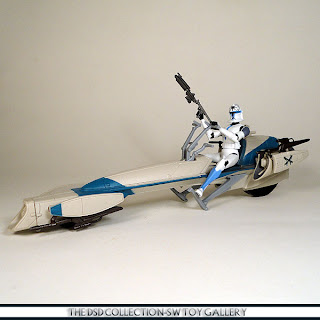 Introduction: Hasbro has put out many BARC Speeders lately, so today's VOTD features the one that includes Jesse the Clone Trooper with a black logo on the front of his helmet. This speeder looks like it could of used a rip cord and is on wheels. Maybe it has been gutted, maybe an old ripcord will make it go. Who knows?

My Opinion: Personally I have passed on most of the BARC Speeders but I am impressed with their look. After opening this one, I want to go back and get all of the previously released version including the very first one from the ROTS line. I think that one had a ripcord. How many of you actually found this version with Jesse?
Description on the back of box:
"Clone trooper Jesse pilots a BARC speeder bike to track down General Grievous in the Saleucami wetlands. The one-man bikes are named for the Biker Advanced Recon Commandos who first used them. On the swift, maneuverable BARC speeders, Jesse and his team can cover a lot of ground as they search for the cyborg general."

Click here to view the full gallery.
http://www.deathstarplans2.net/ToyGallery/categories.php?cat_id=2615
Posted by DeathStarDroid at 8:02 AM