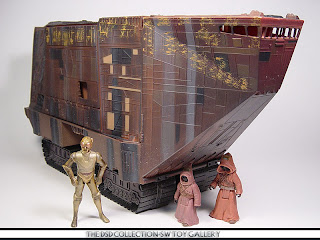 Introduction: The new Sandcrawler used the same sculpt as the Vintage remote control version of the 70's but with an updated paint job. This time around they removed the electronics. Also included are 3 figures, yes that's right, we get THREE! However, they are all repaints. Either way more figures are always welcome. The new Sandcrawler ended u...p being an exclusive for Diamond Comics Previews making it a little bit harder to get. I found mine at Frank n Sons in the City of Industry, Ca for $40 because the box was a wreck. I had to talk the dealer down on the price.

My Opinion: I was happy to score mine for so cheap since I never had one as a kid. The Vintage ones go for a pretty penny now a days. Just like everyone Else's opinion, I have to say that the scale is horrible. Great for little kids but we want full scale vehicles. Anyhow, I took many images of this vehicle with various other figures to create some mini dioramas. You will notice that only a vintage R2 unit will fit in the elevator. The modern droids will not fit again due to the use of the vintage sculpt. Although there are many complaints about this vehicle in the collecting community, I am proud to still own one in my collection. How many of you have one of these Sandcrawlers?

Description on the back of box:
"The timid and greedy Jawas make a sparse living by scavenging scrap metal and lost droids on the planet Tatooine. They travel the desert landscape in huge sandcrawlers that are both their homes and bases of operations. One day, they capture C-3PO and R2-D2, who have come to the planet to give Obi-Wan Kenobi an important message from the Rebel leader Princess Leia. Eventually, they sell the two droids to Owen Lars, whose nephew, Luke Skywalker, discovers the hidden message in R2-D2 and becomes embroiled in the fate of the galaxy. "

Click here to view the full gallery.
http://www.deathstarplans2.net/ToyGallery/categories.php?cat_id=394
Posted by DeathStarDroid at 7:45 PM