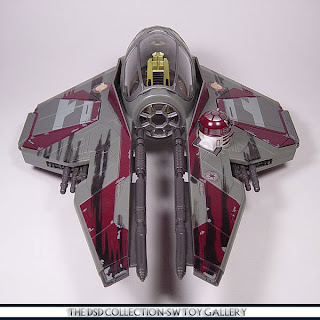 Introduction: Hasbro introduced everyone to a new breed of attack ships with the new incarnation of the Jedi Starfighter. Today's VOTD features Obi-Wan's version. This sleek new ship has many features hidden within the wings from attack mode to missile launchers. Hasbro went backwards a little bit by going with the stationary Astromech unit inst...ead of allowing us to put our own Astromech droid in the socket. However, they met us half way on the matter. You can pull the plastic dome out of the ship and place your own but it will only sit in the socket halfway.

My Opinion: At first I was not to fond of this style of ship but eventually these starfighters grew on me. Now I like them so much that I want to get every variation of them. My biggest complaint though is the droid socket. Hasbro didn't make the location deep enough to put a regular astromech droid in there. Other than that, I think this ship is a nice welcome to the Star Wars universe.
Description on the back of box:
"Obi-Wan Kenobi battles deadly droid fighters while on a mission to rescue Chancellor Palpatine, who has been kidnapped by Separatist forces. As he heads for the vessel on which the Chancellor is being held, buzz droids attach themselves to his starfighter to destroy it."

Click here to view the full gallery.
http://www.deathstarplans2.net/ToyGallery/categories.php?cat_id=285
Posted by DeathStarDroid at 12:07 PM