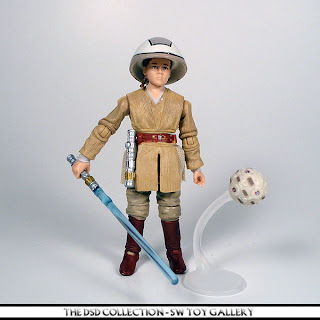 Vintage Collection Anakin Skywalker as a padawan has been added to the Toy Gallery. This incarnation of Anakin is one of the best to date. Not only do we get full articulation but we get four accessories. The helmet even stays on securely and doesnt fall off like the previous padawan hardhats. Unforenately my sample has a few paint ap drips on the outfit. Quality control seemed to be poor when painting this particular figure. Other than that, I am quite happy with this figure. Click the link below to view the rest of the images.

Although he would later become a crucial figure in the galaxy, Skywalker came from humble origins. He spent the first years of his life on Tatooine as a slave along with his mother. In 32 BBY, Skywalker met Jedi Master Qui-Gon Jinn. After obtaining his freedom by having been bet on by Jinn and winning the Boonta Eve Classic, Skywalker went with Jinn and departed from Tatooine, though troubled by leaving behind his mother. Skywalker took part in the Battle of Naboo, destroying the Droid Control Station despite his young age. Soon after, he joined the Jedi Order, becoming a Padawan to Obi-Wan Kenobi. Skywalker was believed to be (and indeed was) the Chosen One of Jedi prophecy, one who would bring balance to the Force by destroying the Sith, which was why the Jedi Council chose to bend the Jedi Code and permit his training. -Taken from Wikipedia.com

Click here to view the full gallery:
http://www.deathstarplans2.net/ToyGallery/categories.php?cat_id=2753
Posted by DeathStarDroid at 10:10 AM