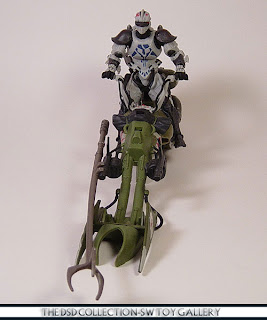 Introduction: In 2003, Hasbro changed up the line and released Clone Wars figures with the same look as the regular figures. Later they went cartoonish, but first we ended up with a short lived line of figures. Durge on a swoop bike was pretty much the best toy of the year. The bike itself was awesome. How many of you own this particular speeder?

My Opi...nion: Back in 03 my collecting had slowed down some due to other reasons in life so I had passed on many of the Clone Wars collection. I wasn't impressed with this line anyways and definitely didn't like the animated figures either. When I saw this deluxe figure with bike, I definitely picked one up. This by far is the best figure and vehicle of the Clone Wars line.

Description on the back of box:
"A century before the Clone Wars, this 2,000 year old bounty hunter went into hibernation to recuperate after being tortured by Mandalorians. Awakening shortly after the Battle of Geonosis, Durge learns that the only Mandalorians still alive are the Clone Troopers, which were created from Mandalorian Jango Fett. Durge joins the Confederacy to enact his revenge upon Jango Fett's clones. His swoop bike is a high-performance craft with exceptional speed and challenges even the most skilled pilots. Simple vehicles, they achieve their performance through a combination of repulsor lift and turbo thrust engines. "

Click here to view the full gallery.
http://www.deathstarplans2.net/ToyGallery/categories.php?cat_id=427
Posted by DeathStarDroid at 9:07 AM