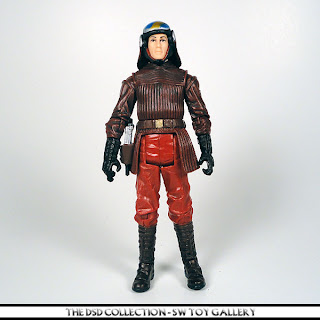 Finally we get a nice scuplted Naboo Royal Guard. The first release was horrible with its shooting stance. When you put his arms down he looked totally retarded. This time around we get a fully articulated figure. Now if we can only get a few different head sculpts for future releases. By far this has to be the biggest improvement on any figure. What do you think about this figure? Leave your comments below. According to Wikipedia, this figure is named Chamberlyn.

Chamberlyn was a male Human who served as a lieutenant in the Royal Naboo Security Forces during the Trade Federation's invasion of Naboo. Chamberlyn became a leader in the resistance against the invader, and was responsible for analyzing and discovering weaknesses in the battle droids. Chamberlyn later accompanied Queen Padmé Amidala in an assault on the Theed Royal Palace during Amidala's bid to retake Naboo, helping her capture the Federation's Viceroy Nute Gunray.

Chamberlyn first appeared as an unnamed background extra in George Lucas' 1999 film Star Wars Episode I: The Phantom Menace, portrayed by an uncredited actor. The character received his name in the 2001 Theed Palace Limited expansion of the Star Wars Customizable Card Game by Decipher, Inc. In 2008, Lieutenant Chamberlyn received an entry in The Complete Star Wars Encyclopedia.

Click here to view the full gallery:
http://www.deathstarplans2.net/ToyGallery/categories.php?cat_id=2756
Posted by DeathStarDroid at 12:55 PM