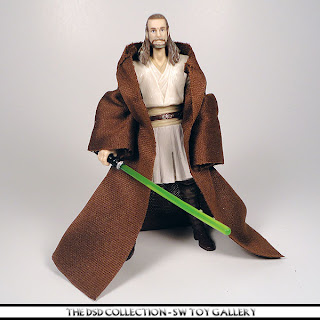 Would you believe that Hasbro actually repacked this figure just to put it on a Vintage Collection card? Well you are right. Qui-Gon Jinn is a repacked figure from 2008's TAC Evolutions: The Jedi Legacy set. We already have this figure, why repack it? Let's get a new sculpt if we are going to put it on a Vintage Collection card. Anyways, check out the gallery I put together of this figure. The soft goods robe is very nice and even though the skirt is soft goods as well, this figure does not have the ball joint hips.

Qui-Gon is introduced in The Phantom Menace as a wise and powerful Jedi Master and the teacher of the 25-year-old Obi-Wan Kenobi. Unlike other, more conservative Jedi, he values living in the moment as the best way to embrace the Force. While other Jedi respect him, they are frequently puzzled by his unorthodox beliefs, and ultimately deny him a seat on the Jedi Council.[1] Obi-Wan remarks that Qui-Gon has been in conflict with the Council several times in the past. Attack of the Clones reveals that he was trained in the ways of the Jedi by Count Dooku.[2] In Revenge of the Sith, Master Yoda reveals to Obi-Wan that Qui-Gon's spirit has learned the secret of becoming one with the Force, which he teaches to both Yoda and Obi-Wan.[3] In Star Wars Episode V: The Empire Strikes Back and Star Wars Episode VI: Return of the Jedi, both Obi-Wan ,Yoda and a redeemed Anakin are shown to have fully mastered this ability after their deaths. -Taken from Wikipedia.com

Click here to view the full gallery:
http://www.deathstarplans2.net/ToyGallery/categories.php?cat_id=2748
Posted by DeathStarDroid at 11:17 AM