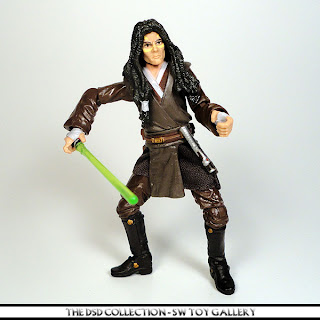 I have returned with a brand new Toy Gallery Update featuring Quinlan Vos from the Vintage Collection series. Many of you may have noticed that I have taken a break from photography of my collection but now I am back with a lot to catch up with. I randomly picked this figure to start things off. As you can see mine was unpunched so yes it was hard to open. Well not really! I open my figures regardless of card condition since I am an opener. Well enough about me, check out the latest gallery of images I have put together.

Quinlan Vos was a Kiffar Jedi Master in the Jedi Order and a General in the Grand Army of the Republic during the Clone Wars. He hailed from the planet Kiffu in the Inner Rim Territories.
With long, dreadlocked hair and a band of pale yellow across his upper face, Vos was gifted with psychometric powers which allowed him to "read memories" from inanimate objects through physical contact.
Vos had an ongoing struggle with the dark side of the Force, particularly after he sustained recurrent amnesia after he overdosed on an illegal drug administered by an enemy shortly after the Battle of Naboo. The Sith Lords Darth Sidious and Darth Tyranus both showed an interest in him.
He was a prominent participant in the Clone Wars, one of the few survivors of the Great Jedi Purge and, with his lover Khaleen Hentz, conceived a son named Korto Vos.
Vos was openly disdainful to clones, which lead to him being disliked by clones and hated by Sergeant Kal Skirata.[2]  -Taken from Wookiepedia

Click here to view the full gallery:
http://www.deathstarplans2.net/ToyGallery/categories.php?cat_id=2758
Posted by DeathStarDroid at 1:01 PM