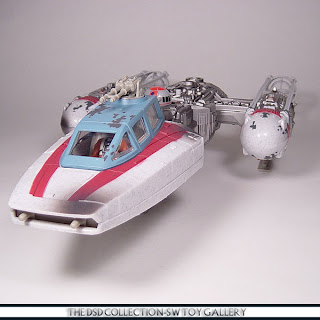 Introduction: Today's vehicle of the day features the Original Trilogy Y-Wing Fighter which is the same sculpt as the POTF2 version, which was the same mold used as the Vintage version minus the battery compartment. The color marking were never seen in the movies, but were used on an Expanded Universe version of the Action Fleet vehicle.

My Opinion: I personally n...ever saw this in the stores back in 2004 but I did get mine from fellow collector RogueLeader from Japan while he was stationed there. He found this on clearance at ToysRus back in 2006. SO essentially I got mine 2 years after its release. I like how Hasbro used the Action Fleet colors on a 3 3/4 Y-Wing. I had fun during the photography of this ship because the inside package made a great diorama image. The fast moving Y-Wing image was no trick photography, it was just the simple background of the box. Simply amazing! Do not throw that away when you open yours. How many of you own this version of the Y-Wing?

"Y-wings are durable, reliable starfighters that excel in close-quarters combat. During the battle of Yavin, Y-wing squadrons were influential in helping to defeat the Death Star threat. Designated attack fighters, Y-wings went one-to-one with imperial fighters as the Rebels attempted to reach the battle station's vulnerable exhaust port. Jon "Dutch" Vander was Gold Leader of the Y-wing Gold Squadron during the Battle of Yavin, fighting bravely against the powerful Imperial forces."

Click here to view the full gallery.
http://www.deathstarplans2.net/ToyGallery/categories.php?cat_id=397
Posted by DeathStarDroid at 8:43 AM