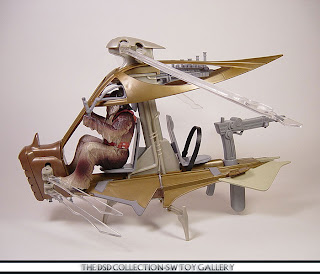 Introduction: With the Revenge of the Sith movie out, Hasbro did a few battle type vehicles. This one was called the Wookiee Flyer which features a Wookiee figure that is not very poseable. We get a sitting furball in a funny looking stance. This vehicle was one of 3 different battle size vehicles under the ROTS packaging.

My Opinion: Personally, I think this thin...g is horrible. I was disappointed in this toy all together from what it is to the boring figure included. Why couldn't we of got a figure that was full poseable? This is my least favorite toy in my collection. Just plain worthless, in fact I didn't even like seeing these in the movie. Thumbs down on this thing, just plain weak. How many of you own one of these things and does anyone have more than one in their collection?

Description on the back of box:
"Wookiee warriors use their special assault flyers in battle to attack the enemy from above. Swift and highly maneuverable, the assault flyers swoop down to launch a powerful strike on invading ground forces. Take to the skies with the Wookiees and let the battle begin! "

Click here to view the full gallery.
http://www.deathstarplans2.net/ToyGallery/categories.php?cat_id=289
Posted by DeathStarDroid at 10:22 AM