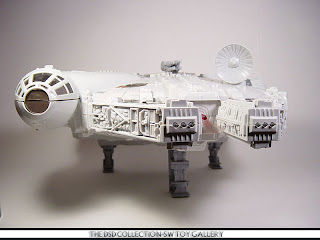 Introduction: The Millennium Falcon has been re-issued many times over the years using the vintage mold. Each time Hasbro released this vehicle, they added something new and packaged it in the current style box at the time of its re-release. Today's version was released in ROTS style colors back in 2005 and was updated to include rear thruster ...light up electronics. Check out the gallery to view these changes.

My Opinion: I picked this Falcon up back in 2005 and to this day I have yet to see anyone else include this particular version in their image galleries. It would of been nice to see other collector's images of this large vehicle. The box was quickly change to resemble the OTC line which was a more common box to find. I had a lot of fun when I photographed this ship but keep in mind I shot these photos back then with a weaker camera which explains why the box shots are little fuzzy. How many of you picked up this release?
First Appearance: Star Wars
Year Released: 2005 (ToysRus Exclusive)
Retail Price: $39.99

Click here to view the full gallery.
http://www.deathstarplans2.net/ToyGallery/categories.php?cat_id=293
Posted by DeathStarDroid at 11:13 PM