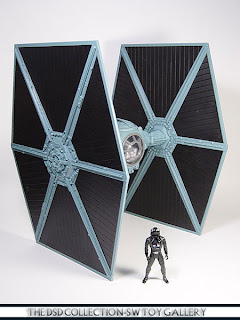 Introduction: The TIE fighter is one of the most admired vessel in the Star Wars universe but back in the day when I was a kid we got this little tiny winged ship that popped apart. Not bad back then but Hasbro went back and made larger wings in 2005 using the same cockpit. Now that is a TIE Fighter. Now all of the older version are unwante...d by many collectors and many of them have become custom fodder. Later on Hasbro started updating the cockpits and giving collectors different colored versions. The wings still eject and the cockpit is the same as the POTF2 version. Kudos to Hasbro for updating the wings.

My Opinion: I absolutely love this larger scaled wing version of the TIE Fighter but I thought it was kind of chicken of them to repack an old out of date Pilot. Although many hardcore collectors have armies of these, I only have one of each version. These things are too big to display if you have an army of them. However, that is awesome to see many of them lined up. This TIE Fighter makes a great display piece in any collection. I highly recommend that every collector have this in their collection. I also collect one of each of everything so yes I do have the smaller winged version as well.

Description on the back of box:
"TIE Fighters swarm into space to attack the heroic Rebel Alliance forces! TIE Fighters are the standard starfighters of the Imperial forces. The pilots are highly skilled, but they are no match for the daring and resourceful Rebel pilots! TIE fighters waged a fierce battle to defend the first Death Star from the Rebel attack. Re-create the action and adventure of Star Wars! "

Posted by DeathStarDroid at 7:41 PM