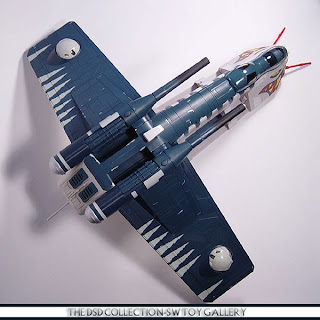 Introduction: As seen on the Cartoon Network's Clone Wars animated series, this Republic gunship displays an awesome new paint decor. Hasbro went above and beyond when they decided to give us this repainted gunship. At first this gunship was hard to find but after a few months after its initial release they were easily found soon enough.... This vehicle is massive with the wing span is so large that it makes it difficult to display for a collector on a regular shelf. Most collectors like to hang these gunships from their ceilings.

My Opinion: When this gunship came out, I was on the hunt at ToysRus for days. I had to travel to 5 different stores until I finally scored one. I had to have an employee bring one out for me because they where so hot that they never lasted on the shelves. Once at home, I quickly opened this bad boy up and photographed it for my Toy Gallery. I already had the first released version but missed out on the black colored Clone Wars original release. There are more then 4 version released to date. Between Hasbro's release and many customizers getting their sticky painted fingers on them, we have seen a vast army of different painted gunships. Just having the Hasbro version takes up a whole wall on display. If you do not have this painted version in your collection then I suggest hunting one down.

Description on the back of box:
"Who can forget the explosive scene in the Clone Wars animated series when a customized Republic Gunship swoops into action on a desperate rescue mission. Armed with an impressive arsenal of weapons and painted to resemble a snarling beast, the gunship swoops over a vast army of battle droids to confront the deadly General Grievous himself head-on. Heavy laser cannons blaze in rapid fire, driving Grievous off and clearing a path for the ARC troopers to gather the wounded Jedi. Although the troopers are unable to eliminate the swift-moving Grievous, they successfully escape with the remaining Jedi Knights and simultaneously set off a series of explosive charges that rock the droid army. "

Click here to view the full gallery.
http://www.deathstarplans2.net/ToyGallery/categories.php?cat_id=1277
Posted by DeathStarDroid at 8:10 AM